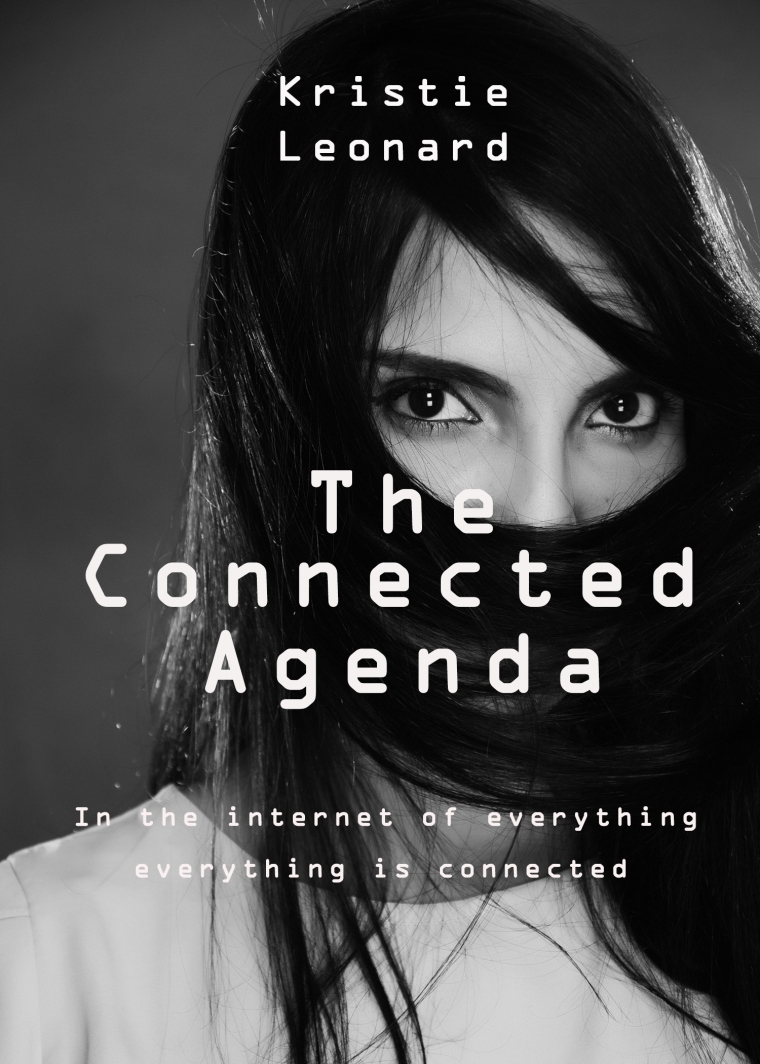 One of our favorite authors, Kristie Leonard is making her new high-tech thriller The Connected Agenda, available to our readers in serial format. The story involves artificial intelligence, chatbots, big data, and all the topics we discuss on Big Data Analytics Tech Brief - but in a more entertaining way. Follow Kay Whatley as she uses her cyber skills to defeat threats to her friends and discovers her family's link to the Austrailian hacker gang from the 1980s - The Realm. The first episode is available now and Kristie will post a new free episode every week for the next few months.

Here's the trailer for The Connected Agenda. The first episode is below.

"Tracey, lunch. 10-12 minutes," Kay Whatley said at her normal audible. By now her personal assistant knew how much money she had to spend, that she was a vegetarian and that she was allergic to shellfish. It had also learned the days of her menstrual cycle and on those days her appetite increased. Tracey even helped celebrate her birthday with a cake and candles delivered to her front door. Kay thought of the good old days when she'd actually order her lunch off a menu and sometimes pay with a credit card. It must have been a pain in the ass to worry about payment methods but in general Kay’s Mother told her it was more relaxing. Going out for a meal was an event and an opportunity to relax.   Her mother told her she remembers when cash was still accepted. Her grandmother had stories about coins. "Tracey. Leave lunch on front steps."

"HR, calling out," Kay informed work that she'd be away from the office. At ViaTech they made employees activate an app in their phone when they left the home-office for lunch or appointments so they could be tracked. They said electronic tracking would be turned off when the employee clocked out at the end of the day, but everyone was skeptical about that. Telecommuting was the norm and almost exclusive at ViaTech. They had developed ways to monitor employees as if they were working at a physical HQ. Rumor was that employees in the future would be bio-chipped when they worked at ViaTech.

Reminders to call her Dad had been coming daily and Kay was always finding excuses not to call him. It was time to stop avoiding it and she knew she had a few minutes before lunch arrived. "Hey Dad; how are things in the Windy City?"

"Not very windy at the moment, Two-Kay (TK). It's great to hear your voice. I was beginning to think that you'd forgotten you're Mother and me. Is it Will that's been occupying your time or ViaTech?"

"A combination, I guess. Work is busy because there is so much growth in the creation of chat bots. They want me to take on more responsibility so I must be doing something right."

"I had no doubt you'd flourish in the tech industry; you're your Mother’s daughter. I just don't want your career to become your life. Your Mother was dedicated to her career in tech, but she didn't know when or how to pull back."

Patsy Whatley was computer phenom who started with a Commodore Vic20 and used a color TV as a monitor. Patsy was a hacker before the term hacker was created and started initiating IRLs before any girl dared. Kay had heard her Mother referred to as a trail blazer for female coders everywhere. Now she was ill, and Kay realized her Mother’s information wouldn’t be available forever. Her Mother was losing her abilities fast and Kay didn’t know if she was ready for that.

Kay rubbed her eyes. She realized why she hadn't called home – lectures. "Message received Dad. On the subject of Mom, how is she?"

"She's still sharp as a tack when her memory is with her, but it’s fading. Between the Alzheimer’s and this crazy cramp-fasciculation syndrome that makes it hard for her to function physically, it’s taking a toll, but she's battling. The doctors say keeping a positive attitude is vital, which is why I beg you to visit," Kay's father said.

"I know Daddy. I'll make it a priority; I promise. I have to go catch some fresh air while the sun shines. I love you and I love Mom." Kay disconnected the call. Her Father was resorting to guilt, which meant she was really needed in Chicago.

At 27, Kay Whatley was apparently experiencing the best years of her life. She was living independently without a load of responsibilities like a mortgage, marriage, or children. Her rented condominium was near her friends, bars, restaurants, and shops that appealed to her lifestyle. Kay walked outside and used her fingerprint to lock her door which she'd use again to gain entry. The lights on the entryway flickered on and lights dimmed when Kay left the house.

Her best friend and neighbor Bryce was just coming back from a run when Kay spotted her. "Hey, slacker. What are you doing out like you haven't a care in the world on a weekday? Doesn't Beauty Tech keep tabs on you I don’t think you need this.?"

"Not anymore. I quit this morning and they're in the process of taking all my devices off-line. I couldn't be happier about that because the company was ’learning’ too much about me. Don’t you feel that way with ViaTech?"

"I do but it's normal if you want to make money and pay rent there are sacrifice you must make. I’m not leaving my job, although some days it’s tempting . I'm having lunch dropped on my steps." Kay pointed up and the drone was depositing it as she spoke. "Anyway, I'll eat when I get back. I was going into downtown Leland– Care to join?"

Leland was a renewing town. It was a depressing place to walk through only a few years ago, but there were signs of revitalization. Most of the shops had shuttered and the fabric mill was abandoned when most of the production was taken overseas. There was also Arrow which dominated everything from clothing to home goods and food. Mom and pop stores were a thing of the past and local grocery chains had been gobbled up by Arrow. Glitzy hair salons and spas that started in New York opened outlets across the country. The town of Leland thought of it as a sign of things to come when their doors opened. They were proved right when a few sit-down restaurants opened and were filled most nights.

There was still a lot to be done with shuttered office buildings that were still unable to attract businesses. Zombie homes dotted the streets in some neighborhoods, but The Heights told a different story. New developments were popping up like daisies. It was hoped by those struggling financially that the close-in neighborhoods saw new construction in the coming years. The biggest blow to Leland came when the company Kay’s dad worked for moved their operations to Chicago. Main street changed from a vibrant business district to a ghost town. Every other store front was vacant, and the municipality ceased funding beautification and infrastructure projects. The chamber of commerce closed and businesses that survived moved to the suburbs. There was one thing that didn’t change; Our Shepherd Presbyterian Church. The bell tower was painted a vibrant white and the bell was polished yearly. Tulips came up in late April followed by lilac bushes and wisteria. The church was comforting and when the bell rang each Sunday, it provided hope for the future of Leland.

"Sure whatevs. I have nothing else to do since I'm unemployed at the moment. Bartending is always an option since I have experience mixing a cocktail and schmoozing with the customers. It's not a bad job if you're single and on the prowl. It's like working at a boutique and getting a first look at hot fashions. I see the men when they're fresh and before they're picked over at the end of the night,".  Bryce said as she checked her snail mailbox.

Read the rest of this episode